We've got five of those from the past 31 years: Batman, Batman Returns and the Nolan trilogy, without getting into the weeds on The Dark Knight Rises' plot holes. We need a great Superman movie much more than we need a good Batman movie. 2021's The Batman, then, has to show us something new – otherwise, as the third live-action iteration of the Dark Knight within a decade, it could start feeling repetitive to audiences, as evergreen as the Caped Crusader is.

This week's costume reveal by director Matt Reeves doesn't give too much away: it's one moody shot of Robert Pattinson's Dark Knight in red lighting, set to music from composer Michael Giacchino. But fans have noticed one key detail in less than a minute of footage: the Bat symbol that Robert Pattinson's Dark Knight wears seems to be forged from a gun, speculated to be that of the firearm Joe Chill used to murder Bruce Wayne's parents.

This touch appears to be inspired by a Kevin Smith and Jim Lee story from the comic Detective Comics 1000 back in 2014, as pointed out by a Twitter user with an excellent memory:

Is it a bit on-the-nose? Well, sure, but superheroes are on the nose. As much depth as Bruce Wayne has relative to other comic book characters, he's still a man dressed as a bat. So why not go all-in on the details? Why not have a Bat symbol forged from a damn gun?

Beyond differentiating this Batsuit from previous versions, it's a detail that tells its own little story. That sort of embedded information about the character is a really cool clue as to the tone of the film, and it's slightly more subtle in terms of characterization than the Batman V Superman Dark Knight keeping the Joker-vandalized suit of a dead Robin in his Batcave.

Generally speaking, fans have been comparing the suit to the outfit from the Arkham games, which has a similar armored look, though The Batman's version looks more angular: 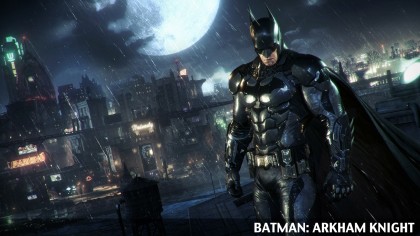 By contrast, Christian Bale's Batsuit looked more like a lightly armor-plated wet suit. Ben Affleck's looked like it was made from thick fibers, which gave the character a bulky look, suiting his MMA-style brutal combat style. Earlier iterations, like Keaton's suit, had a plastic-y armored quality that famously made it impossible for the character to turn his head without rotating his whole body.

It's a tricky thing to get right: the Batfleck suit wasn't perfect, but the Bale version did suit that version of the character, who was trained by assassins to move in and out of the shadows, and therefore needed manoeuvrability to do so.

A story on The Wrap suggests that The Batman will focus on a Bruce Wayne in his second year as the character. The red lighting of this video underlines the noir quality that Reeves has previously used to describe his movie in conversation with The Hollywood Reporter.

"It's very much a point of view-driven, noir Batman tale," the director said in January. "It's told very squarely on his shoulders, and I hope it's going to be a story that will be thrilling but also emotional. It's more Batman in his detective mode than we've seen in the films. The comics have a history of that. He's supposed to be the world's greatest detective, and that's not necessarily been a part of what the movies have been."

This is a Batman who will actually solve crimes, then, which even in the comics isn't always the focus of the character. Some of the best Batman stories, though, like The Long Halloween, Hush and the Batman animated movie Mask of the Phantasm (itself based on the comic Batman: Year Two), do feature ongoing mysteries with a killer twist.

Some fans have compared the moody, noir quality of the trailer (and the lighting) to the latest live-action Daredevil series on Netflix, too. And that's not a surprise either. Both Batman and Daredevil were reinvented in the '80s by Frank Miller in a similarly noirish fashion, that would go on to shape both characters for decades. They're likely just drawing on similar influences, from both Miller and artist David Mazzucchelli.

So, what's in a Batsuit, and a 50-second camera test? A lot, actually, and a hint that we really are going to get a Batman movie that can show us something we've never seen before. The world doesn't necessarily need another good movie about the Caped Crusader, but every sign suggests this one is in excellent hands.