Samsung is taking six previously Korean-exclusive products, ranging from stylish wireless speakers to minimalist phone chargers, and putting them up for sale worldwide.

Among the first of the devices Samsung announced is its Wireless Speaker Bottle design (below), which combines 360-degree audio with multi-color LEDs that can be adjusted by simply ‘pouring’ the bottle-shaped speaker. 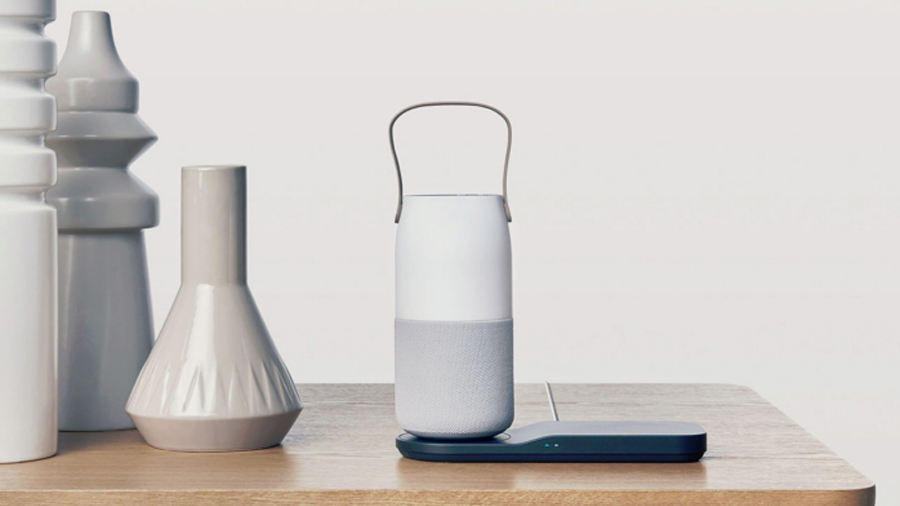 The Wireless Speaker Bottle design is the first of the six new Samsung devices to hit the company’s online store, and retails for $69.99 (about  £55/AU$90).

Also announced was the Wireless Charger Tray design (below), which allows up to two devices compatible with wireless charging to fill up at once, with a third able to tack on with a regular cable thanks to the Tray’s spare USB port. 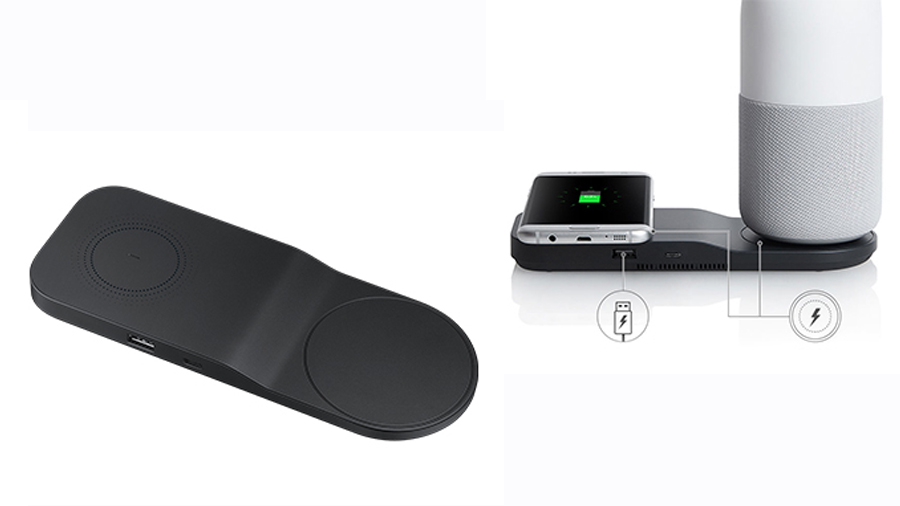 While some brands remain hesitant to adopt wireless charging, despite growing customer interest, Samsung has had its finger on the pulse for a while. The company puts out both its own series of wireless charging docks and compatible phones, such as the Samsung Galaxy S6 Edge.

On the topic of juicing up batteries, another chic charger newly offered by Samsung are the Battery Pack Kettle designs (below), which come in both a 5,100mAh and 10,200mAh version, depending on your charging needs.

In addition to powering your mobile device on the go, the Kettle designs also feature a wrist strap, light-up status indicator, and special cord that props up your phone for watching videos, should you not want to interrupt a movie just because of a dying battery. 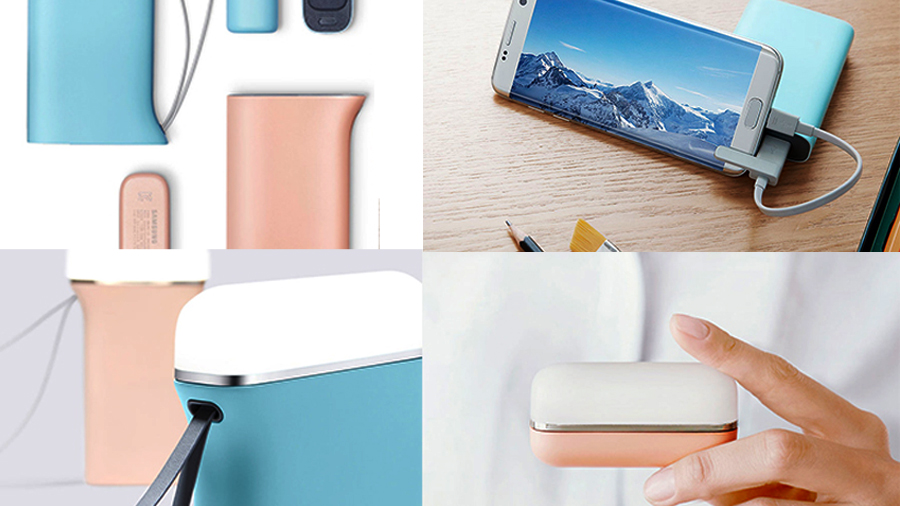 For those attracted to the Kettle design, Samsung also offers a special LED light (above, bottom half) that clips onto the charger – or any USB-enabled device – and transforms it into a lamp.

This not only helps fans of phone-mounted flashlights conserve precious battery, but also works in situations where a single bulb isn’t enough or carrying around an emergency flashlight is cumbersome. 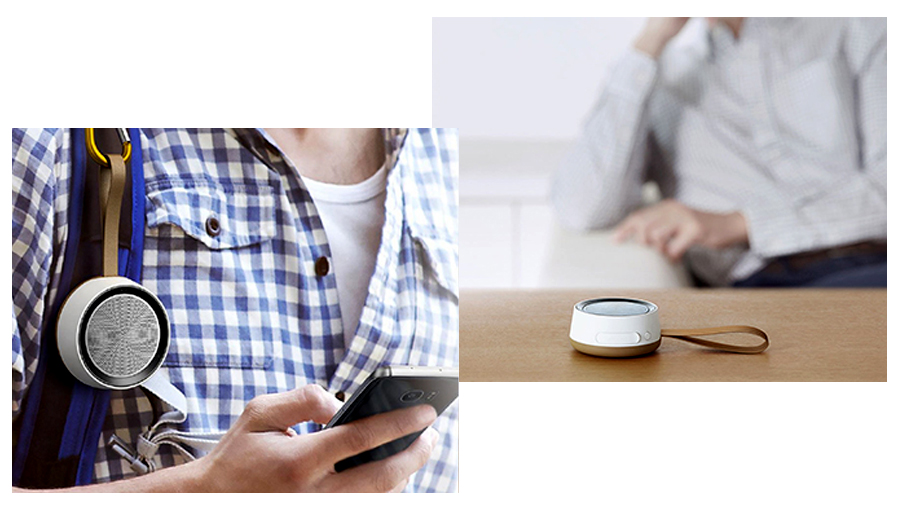 Next is another wireless speaker, this time called the Wireless Speaker Scoop design. Built with a strap that makes it look kind of like a Chromecast dongle, the Scoop is designed for hands-free portability.

Not only is the Scoop splash-resistant – a must for any outdoorsy speaker – but the speaker also doubles as a microphone, ensuring users won’t have to fish out a phone from their pockets whenever a call comes in or voice-activated features come into play.

(That said, you might want to ensure that the caller is okay being put on literal speaker.) 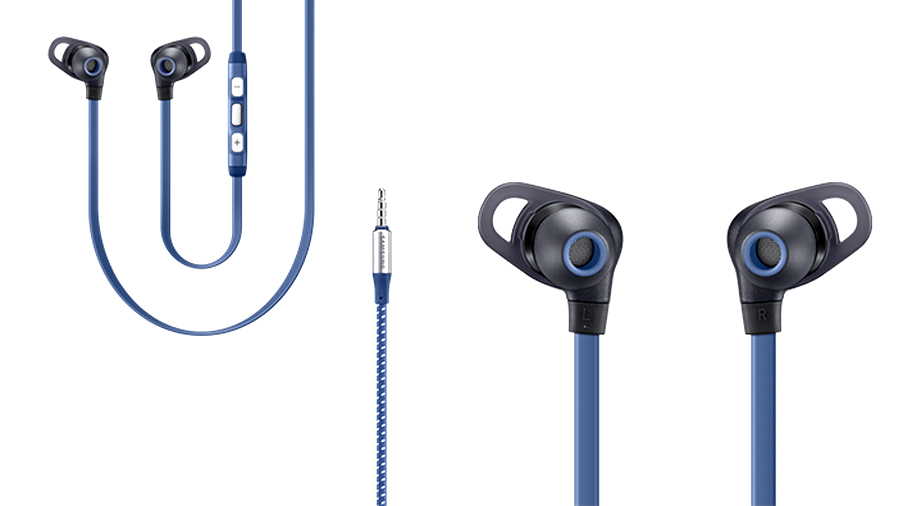 Finally, the In-ear Headphones Rectangle design (above) are a pair of fabric and metal earbuds that sport double-layered motion speaker structure – the latter being a common trait in Samsung-branded headphones and designed for higher-quality audio.

The In-ear Headphones also feature the ever-convenient control switch/microphone setup for picking up calls or adjusting volume, but the thing we gravitate to most is the flat fabric cable that staves off tangling, aka “the bane of all wired electronics.”

When can I get them?

The Wireless Speaker Bottle design is the only product currently available to order, but Samsung adds that the rest of the collection should hit major retailers in early November.

While prices for the remaining products remain unknown until they hit Samsung’s store, we imagine those intrigued by their technical or aesthetic potential appreciate not having to worry about special import fees any more.